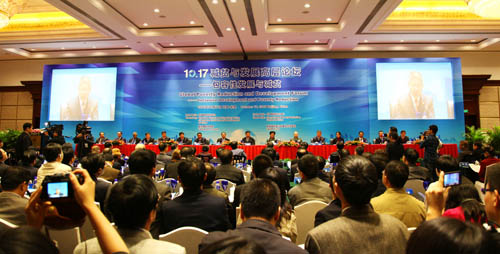 17 October, 2012 --- Upon the 20th International Day for the Eradication of Poverty, the Global Poverty Reduction and Development Forum – Inclusive Development and Poverty Reduction was hosted by LGOP and UN System in China, and organized by IPRCC and UNDP China in Beijing. Hui Liangyu, Member of the Political Bureau of the CPC Central Committee and Vice Premier of the State Council addressed the opening ceremony on behalf of the Chinese government (see the press release of the Xinhua News Agency).

Fan pointed out that poverty reduction and development in China is now at a historical turning point, facing both new opportunities and new challenges. This has been the fifth year since the global financial crisis. The deep-seated impact of the crisis is still reverberating in both developed and emerging economies. As global growth is slowing down, China is under huge external pressure if it is to sustain healthy and fast development. China is still a developing country featuring a relatively low level of per-capita income, noticeable unbalanced regional development, deep-seated rural development bottlenecks, numerous impoverished residents, frequent cases of sinking back into poverty, and contiguous underdeveloped areas, so it is obvious that the task of poverty reduction and development is still arduous. To drive inclusive development and poverty reduction, the government will act in accordance with the objective of building a moderately prosperous society in an all-round way by 2020 and continue promoting simultaneous development of industrialization, informatization, urbanization and farming modernization in poor areas and coordinating development of urban-rural and regional development. The government will make the poorest contiguous areas the key target areas, and make quicker access to food and clothing the top priority. It will continue to play a leading role in striking a balanced development, transforming economic development pattern, strengthening self-development capacity of the people, achieving an equal distribution of basic public services, tackling acute problems that restrict development, striving for a better and faster development and create improved conditions for poverty alleviation and the ultimate poverty eradication.

In his speech, Director Fan also noted that International cooperation and experience are key parts of China's efforts in poverty reduction. We will innovate mechanisms and widen channels to enhance anti-poverty exchanges through "bringing-in" and "going-out".